Saskatchewan's economy was upended by the global pandemic in 2020. GDP fell roughly in line with the Canadian average, bolstered somewhat by high agricultural exports. At the same time, crude oil plummeted in value.

Despite the pandemic and the resulting slowdown in world trade, the value of Saskatchewan exports increased by 2.2% in 2020, making it the only province to register positive growth that year. In 2021, the value of exports grew a further 22.8%, to $37.2B.

Saskatchewan's top exports by value in 2021 were crude oil, potash fertilizers, canola seed, and wheat, in that order. Crude oil moved from the third position to the first between 2020 and 2021 due to a rise in prices. The United States' share of provincial exports increased significantly, from 43.3% in 2020 to 53.4% in 2021. The country is the only foreign destination for Saskatchewan's crude oil.

Conditions picked up in 2021, but a severe drought and resurgent pandemic tempered labour market improvements. Annual employment in Saskatchewan was 2.2% below 2019 levels, the largest gap of any province. Nationally, employment was 0.6% below 2019. 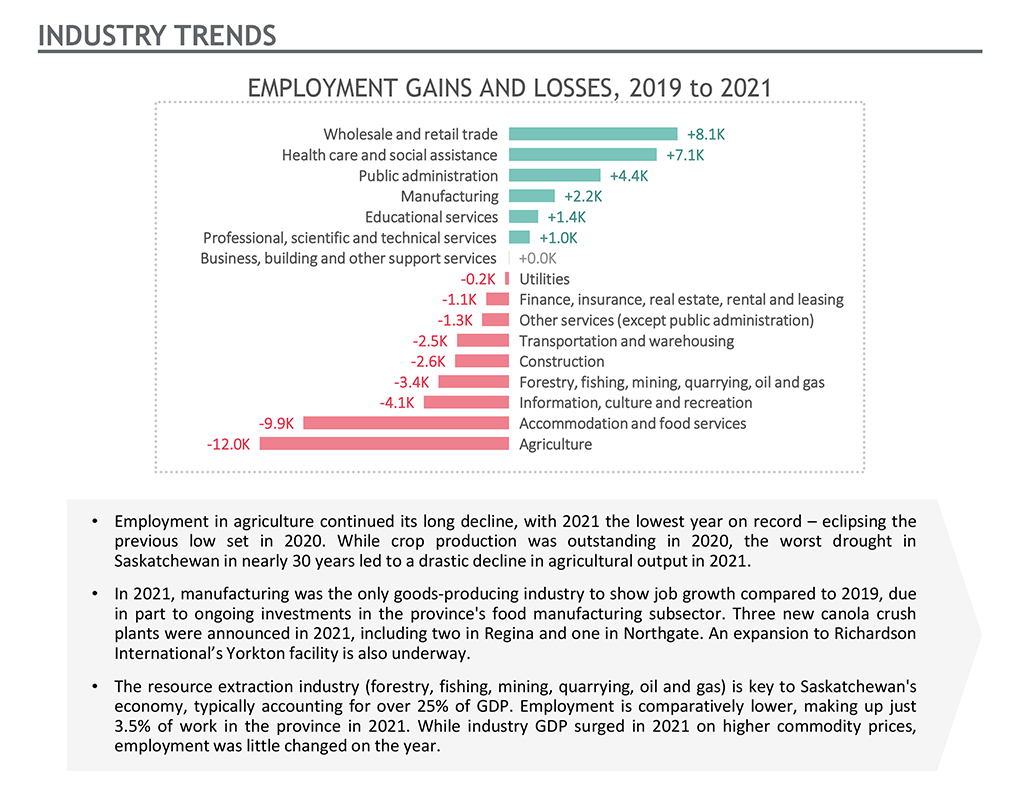 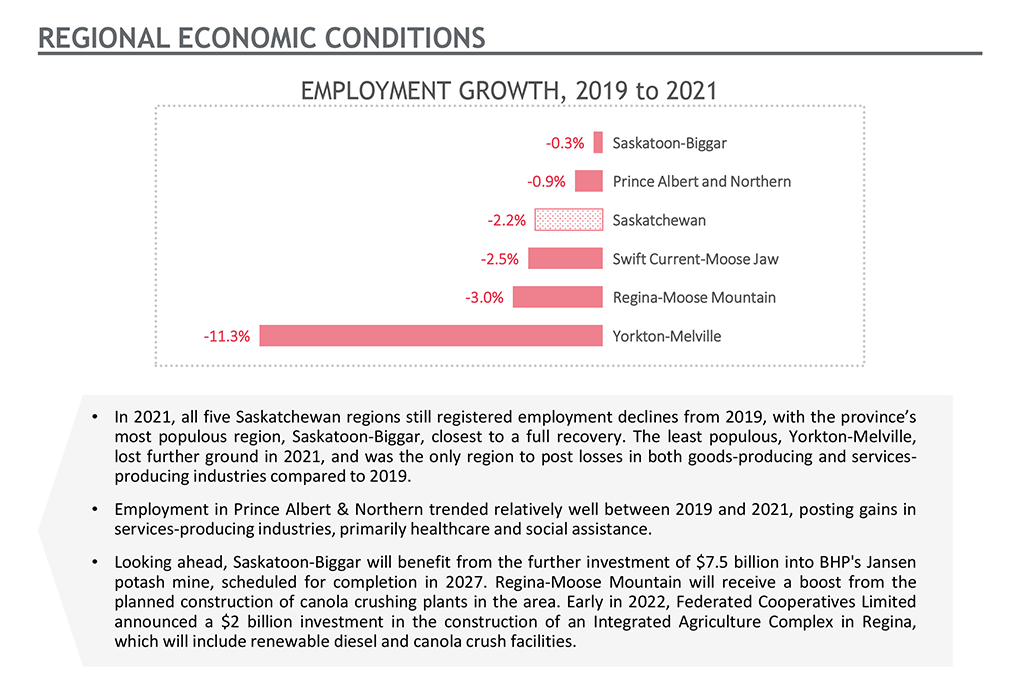 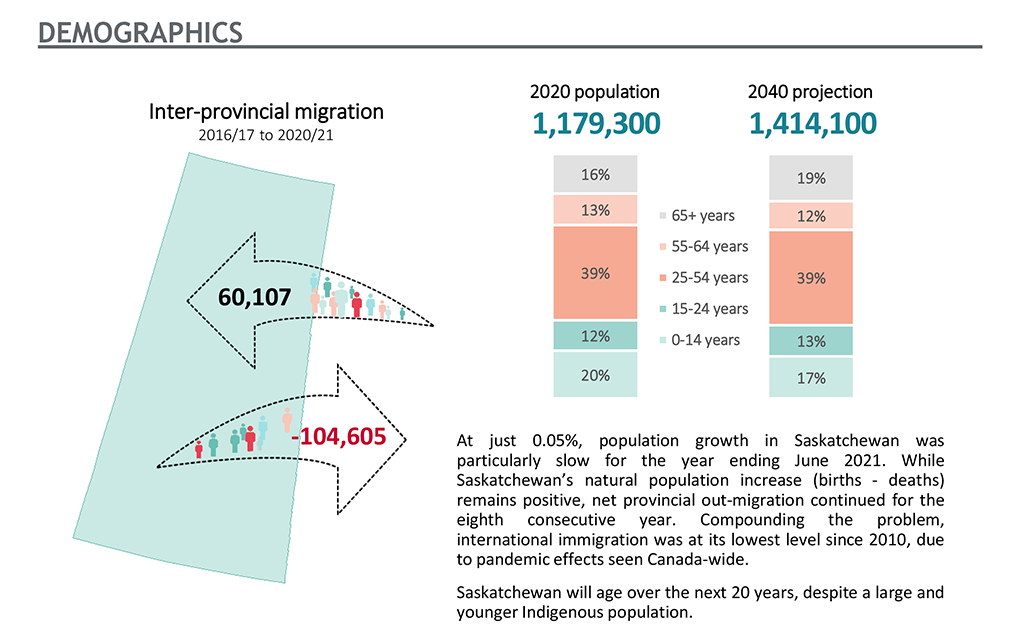 At just 0.05%, population growth in Saskatchewan was particularly slow for the year ending June 2021. While Saskatchewan's natural population increase (births - deaths) remains positive, net provincial out-migration continued for the eighth consecutive year. Compounding the problem, international immigration was at its lowest level since 2010, due to pandemic effects seen Canada-wide.

Saskatchewan will age over the next 20 years, despite a large and younger Indigenous population. 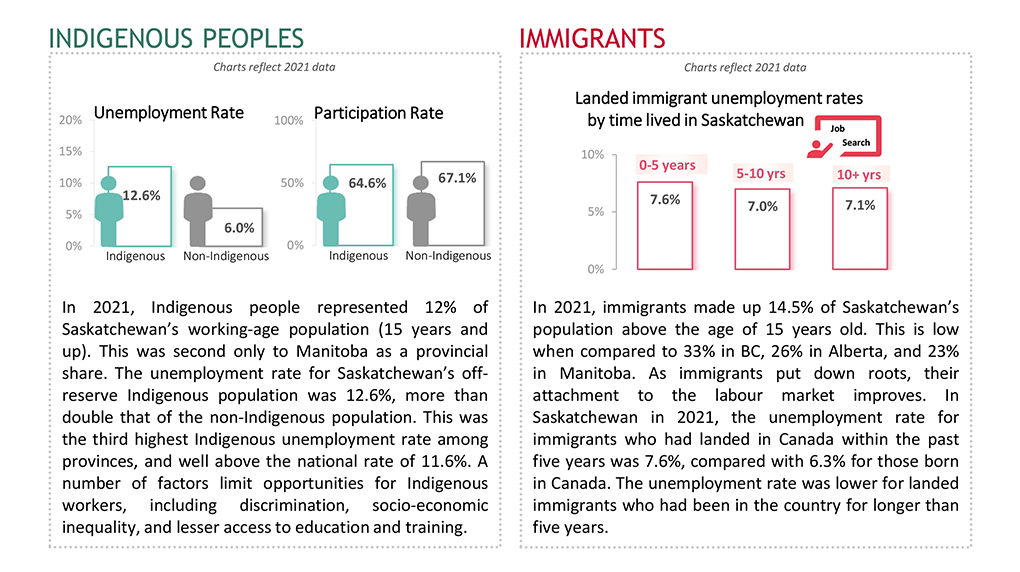 In 2021, Indigenous people represented 12% of Saskatchewan's working-age population (15 years and up). This was second only to Manitoba as a provincial share. The unemployment rate for Saskatchewan's off-reserve Indigenous population was 12.6%, more than double that of the non-Indigenous population. This was the third highest Indigenous unemployment rate among provinces, and well above the national rate of 11.6%. A number of factors limit opportunities for Indigenous workers, including discrimination, socio-economic inequality, and lesser access to education and training.

In 2021, immigrants made up 14.5% of Saskatchewan's population above the age of 15 years old. This is low when compared to 33% in BC, 26% in Alberta, and 23% in Manitoba. As immigrants put down roots, their attachment to the labour market improves. In Saskatchewan in 2021, the unemployment rate for immigrants who had landed in Canada within the past five years was 7.6%, compared with 6.3% for those born in Canada. The unemployment rate was lower for landed immigrants who had been in the country for longer than five years. 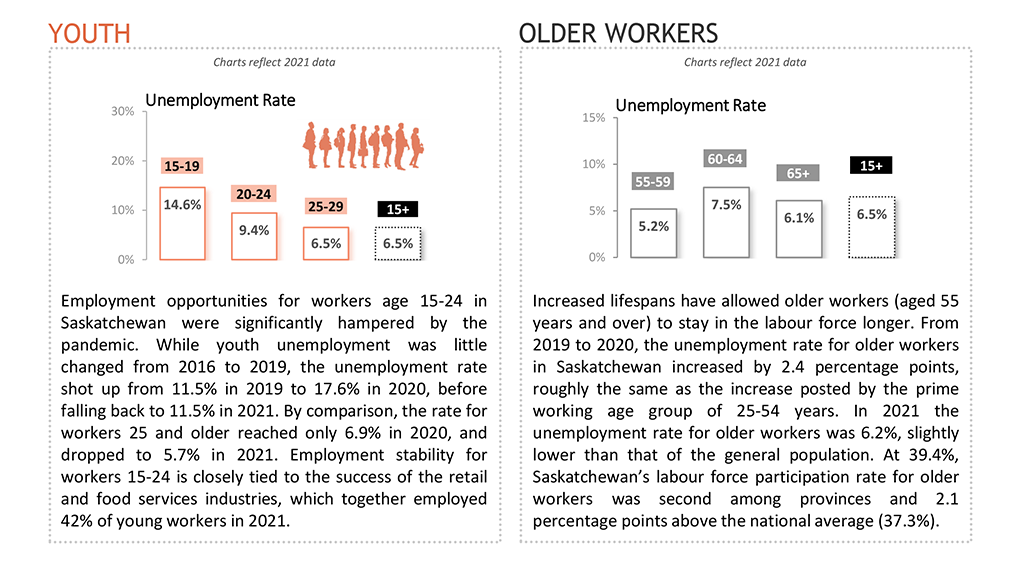 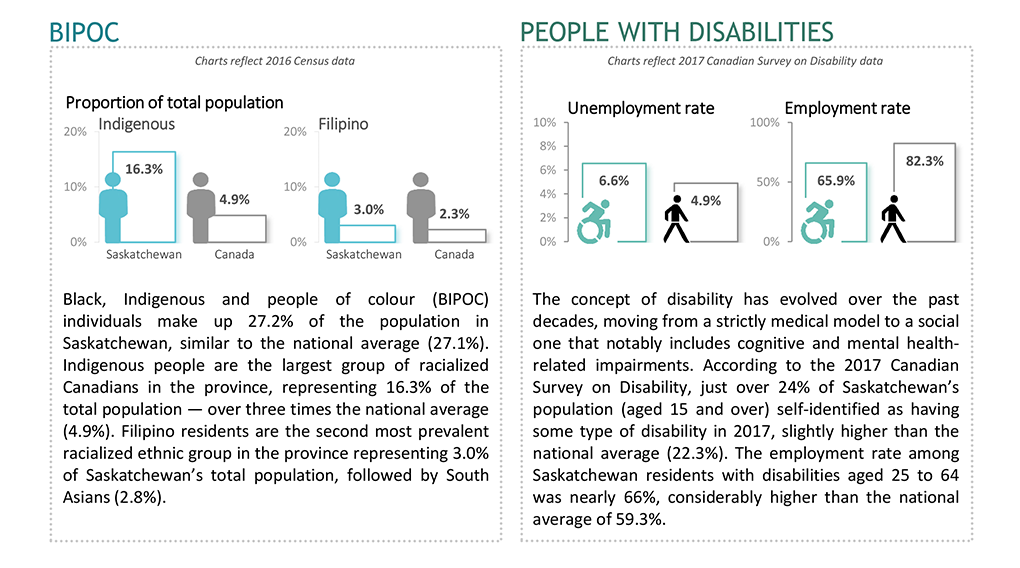 Black, Indigenous and people of colour (BIPOC) individuals make up 27.2% of the population in Saskatchewan, similar to the national average (27.1%). Indigenous people are the largest group of racialized Canadians in the province, representing 16.3% of the total population — over three times the national average (4.9%). Filipino residents are the second most prevalent racialized ethnic group in the province representing 3.0% of Saskatchewan's total population, followed by South Asians (2.8%).

The concept of disability has evolved over the past decades, moving from a strictly medical model to a social one that notably includes cognitive and mental health-related impairments. According to the 2017 Canadian Survey on Disability, just over 24% of Saskatchewan's population (aged 15 and over) self-identified as having some type of disability in 2017, slightly higher than the national average (22.3%). The employment rate among Saskatchewan residents with disabilities aged 25 to 64 was nearly 66%, considerably higher than the national average of 59.3%.