Although the Government of Manitoba had expected a $1.5B deficit for the 2021-2022 provincial budget, the Province spent less than expected and reduced its forecast deficit to $1.1B.

Meanwhile, transportation equipment manufacturing exports decreased for a second consecutive year, down 13% in 2021 to $1.2B. Manitoba is the third largest province for aerospace product export, but this industry is expected to remain challenged due to its close link to travel services.

Job vacancies increased in Manitoba over the last year, up 42% to 25,765 between the fourth quarter of 2020 and 2021. Over 20% of these job vacancies are in the health care and social assistance sector where recruitment and retention has become a provincial priority. 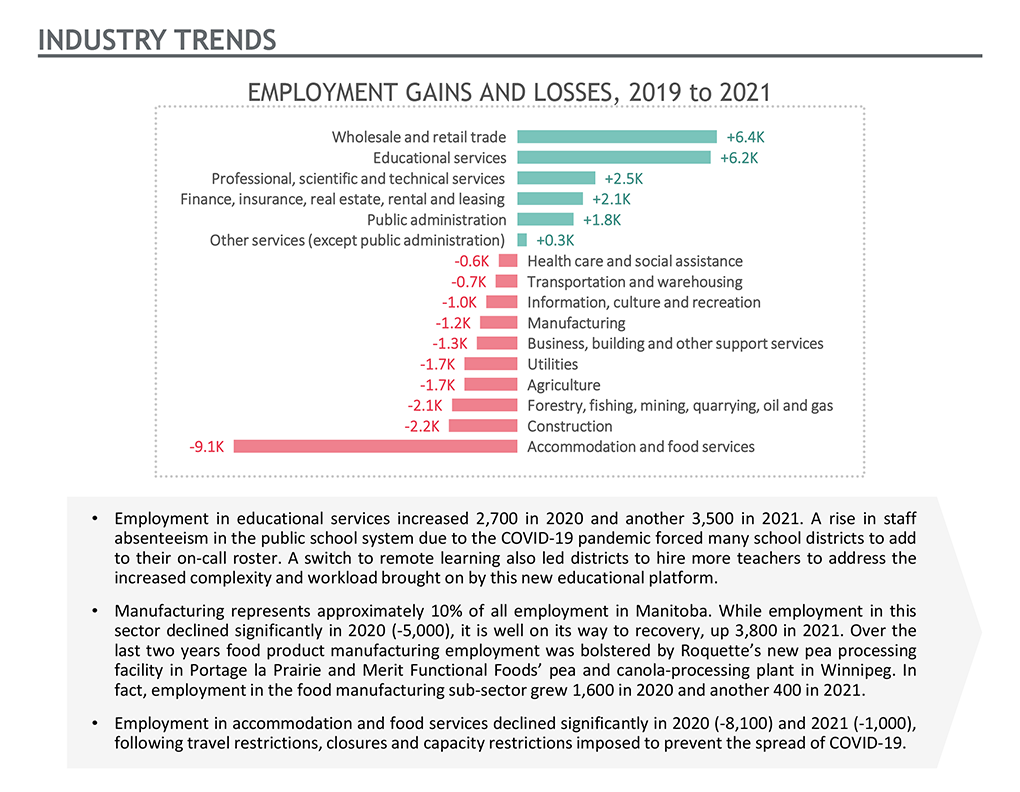 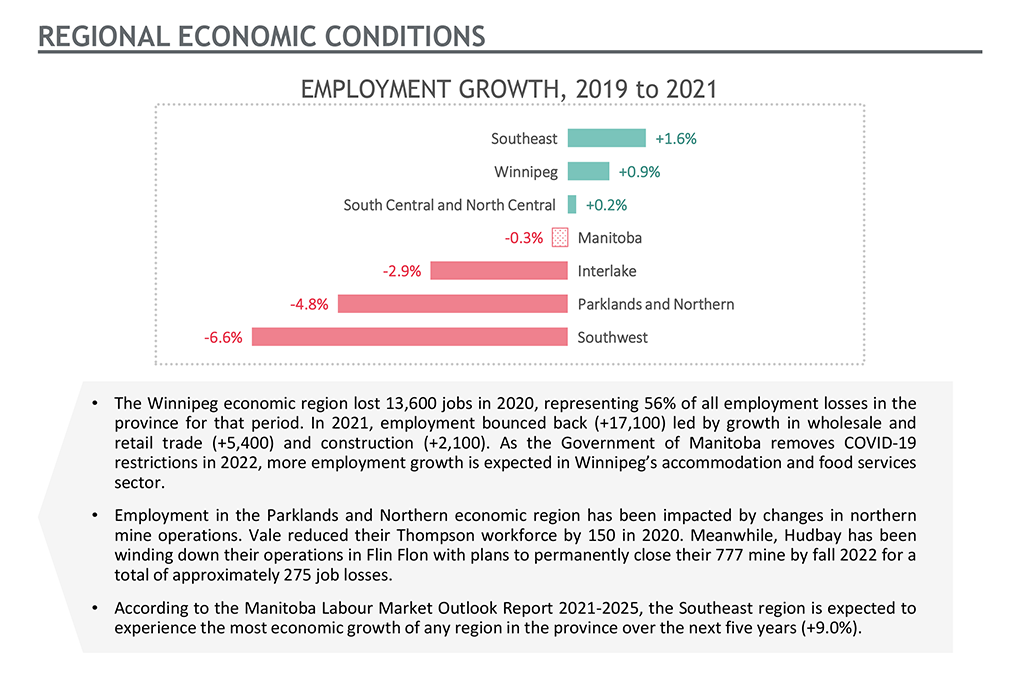 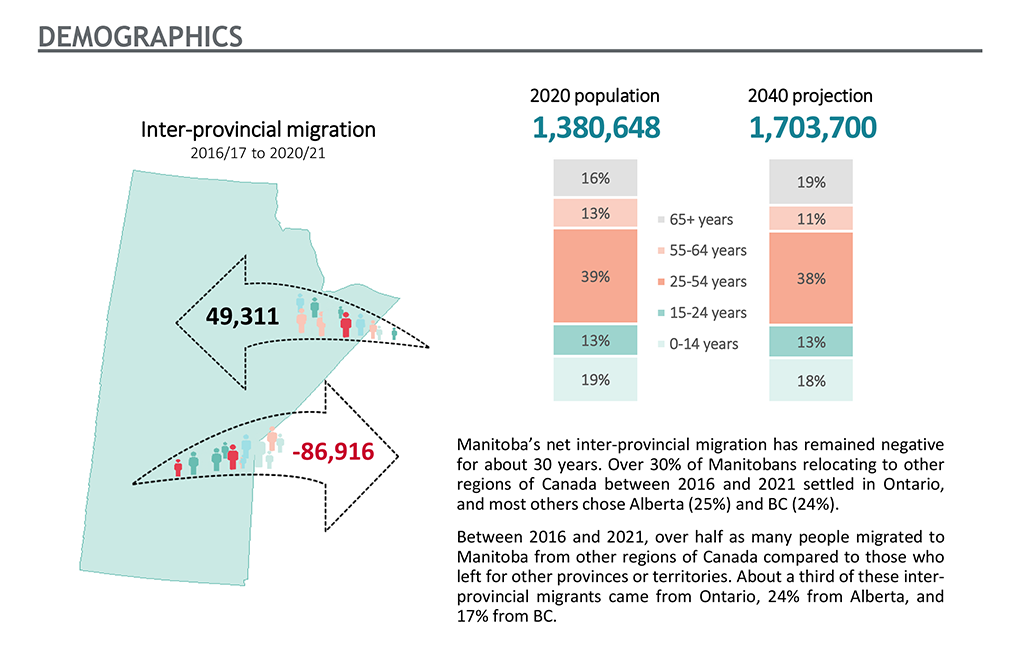 Manitoba's net inter-provincial migration has remained negative for about 30 years. Over 30% of Manitobans relocating to other regions of Canada between 2016 and 2021 settled in Ontario, and most others chose Alberta (25%) and BC (24%).

Between 2016 and 2021, over half as many people migrated to Manitoba from other regions of Canada compared to those who left for other provinces or territories. About a third of these inter-provincial migrants came from Ontario, 24% from Alberta, and 17% from BC. 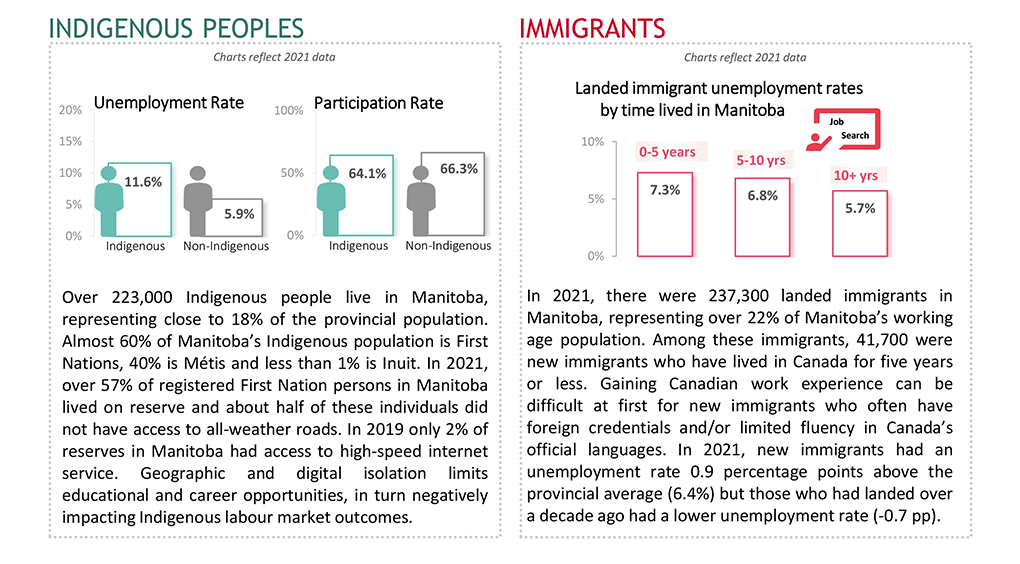 Over 223,000 Indigenous people live in Manitoba, representing close to 18% of the provincial population. Almost 60% of Manitoba's Indigenous population is First Nations, 40% is Métis and less than 1% is Inuit. In 2021, over 57% of registered First Nation persons in Manitoba lived on reserve and about half of these individuals did not have access to all-weather roads. In 2019 only 2% of reserves in Manitoba had access to high-speed internet service. Geographic and digital isolation limits educational and career opportunities, in turn negatively impacting Indigenous labour market outcomes.

In 2021, there were 237,300 landed immigrants in Manitoba, representing over 22% of Manitoba's working age population. Among these immigrants, 41,700 were new immigrants who have lived in Canada for five years or less. Gaining Canadian work experience can be difficult at first for new immigrants who often have foreign credentials and/or limited fluency in Canada's official languages. In 2021, new immigrants had an unemployment rate 0.9 percentage points above the provincial average (6.4%) but those who had landed over a decade ago had a lower unemployment rate (-0.7 pp). 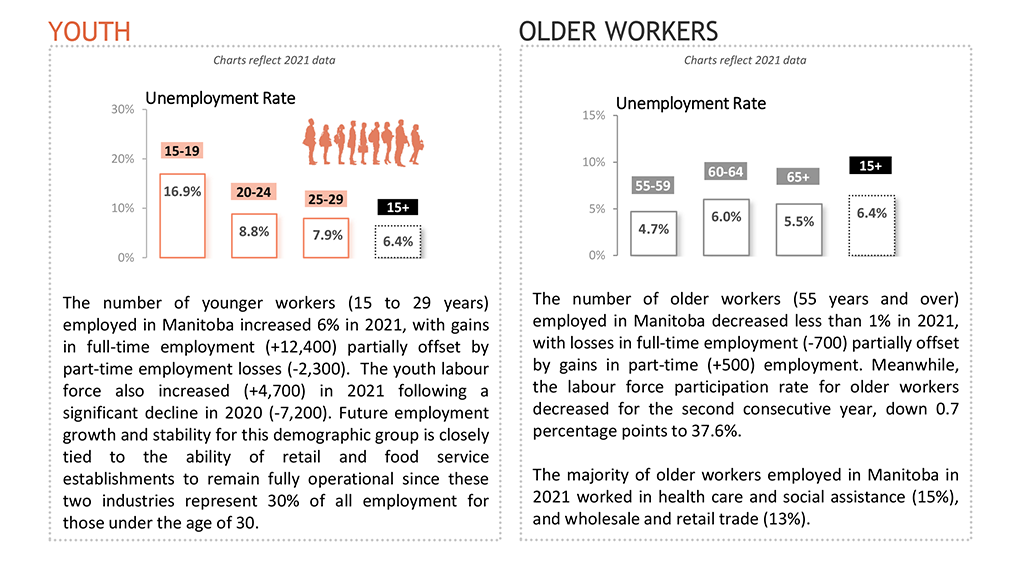 The number of younger workers (15 to 29 years) employed in Manitoba increased 6% in 2021, with gains in full-time employment (+12,400) partially offset by part-time employment losses (-2,300). The youth labour force also increased (+4,700) in 2021 following a significant decline in 2020 (-7,200). Future employment growth and stability for this demographic group is closely tied to the ability of retail and food service establishments to remain fully operational since these two industries represent 30% of all employment for those under the age of 30.

The number of older workers (55 years and over) employed in Manitoba decreased less than 1% in 2021, with losses in full-time employment (-700) partially offset by gains in part-time (+500) employment. Meanwhile, the labour force participation rate for older workers decreased for the second consecutive year, down 0.7 percentage points to 37.6%.

The majority of older workers employed in Manitoba in 2021 worked in health care and social assistance (15%), and wholesale and retail trade (13%). 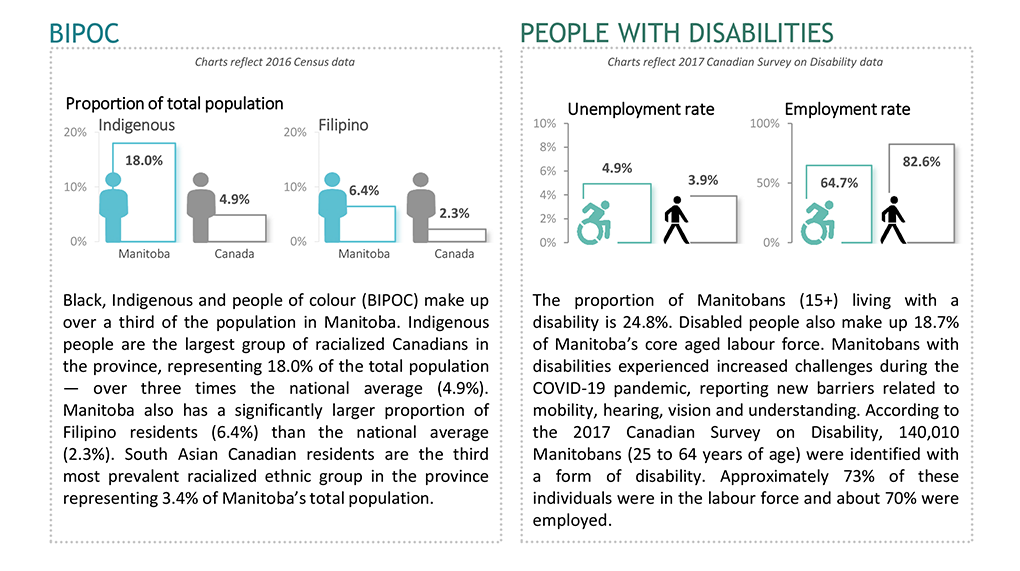 Black, Indigenous and people of colour (BIPOC) make up over a third of the population in Manitoba. Indigenous people are the largest group of racialized Canadians in the province, representing 18.0% of the total population — over three times the national average (4.9%). Manitoba also has a significantly larger proportion of Filipino residents (6.4%) than the national average (2.3%). South Asian Canadian residents are the third most prevalent racialized ethnic group in the province representing 3.4% of Manitoba's total population.

The proportion of Manitobans (15+) living with a disability is 24.8%. Disabled people also make up 18.7% of Manitoba's core aged labour force. Manitobans with disabilities experienced increased challenges during the COVID-19 pandemic, reporting new barriers related to mobility, hearing, vision and understanding. According to the 2017 Canadian Survey on Disability, 140,010 Manitobans (25 to 64 years of age) were identified with a form of disability. Approximately 73% of these individuals were in the labour force and about 70% were employed.